Here's a project I've been working on for the past two days. It's an 8x10 canvas covered with the new SU! Haiku designer paper. Individual images were cut from the paper to create the flowers. JustRite stamps were used to create the circular images around the 3 flowers located near the bottom.

The main canvas was painted with ivory acrylic before I got started. I added Basic Brown ink at the top only after the entire project was assembled (it needed something but not so much as a large image).

The scallops at the top were created using a circle punch and a brass embossing template. The same template was used to create the largets Scallop circle on the left of the canvas. 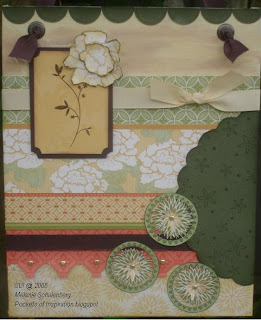 Here's a close-up of the flower embellishment. Several peices of flowers were cut from the designer paper and edged with chcolate chip ink. It really makes the flower pop. 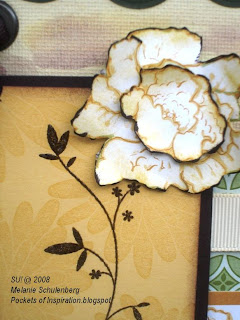 Here's a close-up of the JustRite images. So sweet. 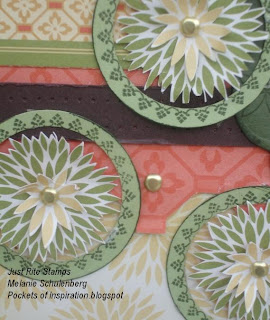 Now, I'll be away from the computer for a while as this Hurricane comes through. Hopefully I'll get some more stamping done! The rain is just about to begin. Stay safe all my friends in the path of the storm.

So gorgeous!! Love those flowers!! :)

You are really talented! 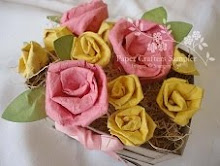 The use of and content of the classes, services, or products offered on this blog are designed by Melanie Schulenberg, SU! Independent Demonstrator, and is not endorsed by Stampin' Up!